If you're reading this blog entry, CONGRATULATIONS!


If you wish to commemorate your achievement, there are some great games you can play:

In Case of Emergency, Release Raptor

Free to Play, available on Steam. Be a raptor, fight back against the robots who have taken over. Be the hero we need, not the one we probably deserve.

Available on Steam. Try to outrun extinction, other dinosaurs, other players. You are a pixel dinosaur. You must survive!

Available on Steam. Multiplayer combat, dinosaurs versus humans. It really doesn't get much better than this.

Posted by Gamer Reverie at 9:30 PM No comments:

Guys, I don't think this is how gardens work.

And I'm pretty sure I'm still very terrible at platforming.

April is Garden Month, and thanks to a handy little poll I whipped up and shared everywhere (special thanks to Skin Deep comic's Discord Avalon members)... the masses voted for PixelJunk Eden as the game for the theme. (The other games in the poll are listed at the end of this entry!)

The premise of PixelJunk Eden is pretty simple: You play as a little creature called a Grimp, and you use various platforming skills to 'grow' the garden around you, collect Spectra, destroy Pollen Prowlers, and make a lot of chaos on your screen. The chillaxing soundtrack and endless playability (you can 'die'... but that doesn't stop you from picking up where you left off) make this a casual experience and less of the stressful gauntlet that most platformers can be. (And boy howdy am I thankful for THAT.) 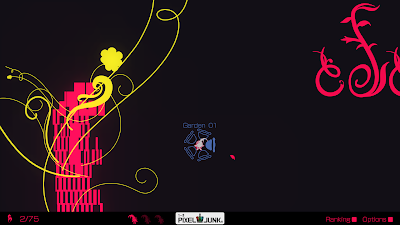 Above is a screenshot of the start screen. It shows that I have played previously and collected exactly 2 Spectra of 75, and that I'm only 20% done with the first garden. I don't know if I'll ever complete any of these gardens because I have limited patience for platforming-type games. I've never really had a knack for precision in games, at least not without the game's help.

Back in the day, when the original NES was the console to have, I would eagerly beg cousins and friends to let me have a turn at being Mario or Link. Because I didn't have a console of my own, the only playtime I had was when these so-called friends and family members would share and hand me a controller. Often their condition for giving me time to play was that my time ended when I died. As you can imagine, I really didn't get to do much aside from being laughed at for being so bad.

Fast forward to when I was able to start getting into my own games by my own means, and you can easily see why I would gravitate towards point-and-click adventure games or puzzles or turn-based strategy. Even now, the number of games in my Steam library that boast the tag 'platforming' is very limited, and nearly all of them were part of some bundle and not a direct purchase.

Now back to PixelJunk Eden. ... I'd have an easier time growing an actual garden because that's something I have actual experience with. Sure, I could practice and try to get better at it, but I'm at the age where I have figured out what I enjoy when I play a game and that's what I want to do. Flinging my Grimp-self into open spaces and hoping to land on a plant or grow a new seed is not it.

For me, the biggest flaw in this game is that open space because there is so little that is actually grown or available when you enter a garden, you have no idea which way to fling yourself. I'm not a fan of haphazard moves in a game -- I like them to count and help me make progress! Unlike the way that each move counts in games like Transistor, your moves in PixelJunk Eden are often as reliable as RNG loot rolls in that MMO you love and have been grinding the one raid endlessly to get the last piece of gear to complete a set.

We all know that feel. That's the feel PixelJunk Eden gives me. 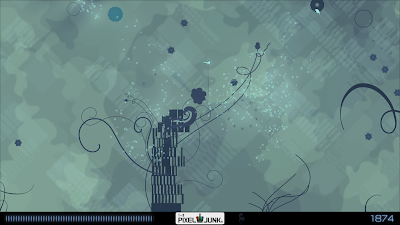 However, it is not a bad game by any stretch. I have played worse (and keep meaning to blog about those experiences, except I keep blocking out the memories...), and this game is quite a few tiers above some other games I have enjoyed passing the time with. The graphics are clean and modern, and being 2D they are easy to look at for an extended period of time. Factor in the unique soundtrack and you've got yourself something that warrants re-releases on newer consoles and platforms. (This started out on the PS3 and they reworked the controls for a PC release.)

I would recommend this game, without conditions. Anyone can play it, and everyone else's mileage will probably be better than my own! 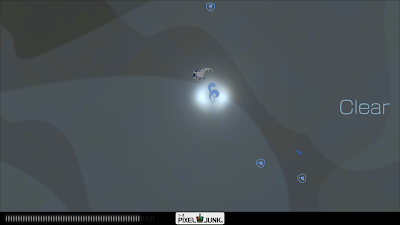 Those Other Games I Mentioned...

The Botanist -- An optimistic game about growing plants and becoming independent, where every word in the world is a seed that grows a unique plant. (Released Oct 2017, Positive reviews)

Viridi -- Nurture a small pot of succulents that grow in real time. (Released Aug 2015, Very Positive reviews)   [I actually picked this one up because it's free to play with a cash shop for extras. It's so casual you'd be better off watching paint dry or, hey, go plant an actual garden.]

Voodoo Garden -- You're owner of a little hut in a bustling swamp. With the help of little spirits you can earn powers and gold by producing various voodoo supplies. (Released Aug 2016, Mostly Positive reviews)

Reus -- You control powerful giants to shape the planet to your will. You can create mountains, oceans, forests and more. Enrich your planet with plants, minerals and animal life. There is only one thing on the planet that you do not control: mankind, with all their virtues and and all their vices. (Released May 2013, Very Positive reviews)

Posted by Gamer Reverie at 5:00 AM No comments: 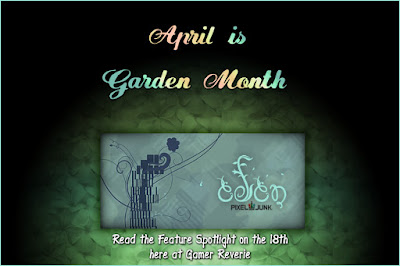 Check back on the 18th for this month's feature entry, or sign up to have it delivered to your e-mail when it's posted!
Posted by Gamer Reverie at 1:40 PM No comments: