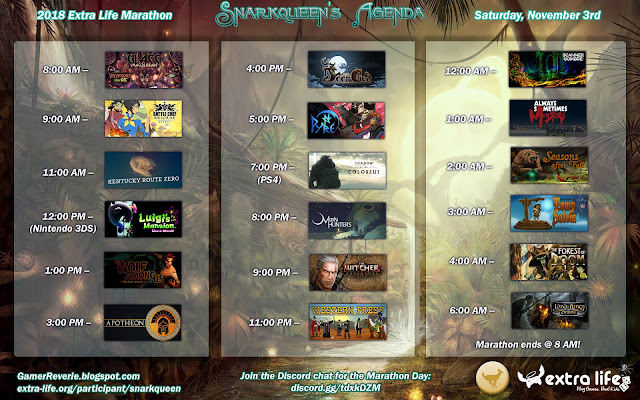 The 24-hour marathon is next weekend!
I have my game schedule planned and ready to go!
This is but a preview of things to come...

First, you need to know that I have only played 2 of the games in my marathon schedule (along with 10 minutes of the 3DS game, and 10 minutes of one other just to look at the graphics). That means that I am going into this marathon very blind and hoping for good things. I figure... why not jot down my thoughts about these titles based on what I know or what I can glean from their store pages on Steam?

1.) Glass Masquerade
I know this is a puzzle game based on stained glass. That's about it. Stained glass is pretty.

3.) Kentucky Route Zero
A super popular adventure game with a lot of good story. So I've been told...

4.) Luigi's Mansion: Dark Moon (3DS)
I played 10 minutes of this and then got distracted by a Alpha Sapphire instead. I did read that it is a sequel to a GameCube game (Luigi's Mansion), and there's a tentatively-titled Luigi's Mansion 3 that's going to come out next year. I dunno -- it's Luigi, and he's dealing with ghosts. I always liked him better than Mario. It's gotta be good if they're planning another sequel, right?

5.) The Wolf Among Us
I chose this game because it is by Telltale Games, and as most gamers know by now... they are closing their doors after they finish the work on their plates. I felt I should play one of their games in the marathon as a tribute to their great work. Plus, this one deals with fairy tale characters and has a good story... supposedly!

6.) Apotheon
Fight the gods to save mankind in Greek mythology. Unique art style. Yeah, that's enough for me!

8.) Pyre
Third game by Supergiant Games. I have traditionally had the first play of their games during my Extra Life marathons, so this one will, too. Something about rites to pass and redemption and freedom or something. (Yay, more Darren Korb music!)

9.) Shadow of the Colossus (PS4)
I watched my husband play a bit of this while we were supposed to be focused on our D&D game via Google. You have a horse. You find these giant temple-building-monster-things. You climb them as they're moving. You find a weak spot. You murderize them. That's all I've got. I let my husband choose this for my queue.

10.) Moon Hunters
Steam says: "A co-op personality test about exploring an ancient, occult world in 5 days. How will you be remembered?" ...so, like... this can go a lot of different ways, and I'm expecting to have multiple, different playthroughs. More pretty pixel graphics.

11.) The Witcher Adventure Game
Digital version of the board game... based on the video games... based on the writing. Geralt and monsters and stuff. Should be fun, yeah? This one was a selection from my GOG.com library.

14.) Always Sometimes Monsters
This is an encore. I have played this in a previous marathon and it got me through the tough early morning hours. It can be a completely different experience with each playthrough, so I felt I should bring it back again.

15.) Seasons After Fall
There's a fox, and puzzles and stuff and you control the seasons and there's pretty artwork. FOX!

17.) The Forest of Doom
Tabletop RPG of the 80's turned into digital choose-your-own-adventure with dice and stats. Yes!

18.) The Lord of the Rings Online
At the time of writing this, I have put 3,764.8 hours into this game. Being the game that got me started in Extra Life, I have traditionally played it in my final few hours of the marathon each year. This year will be no different!


Which games do you think I'll enjoy? What do you want to see me write about in my post-marathon summary? Is there anything you think I should do via Discord or Twitter during the marathon? Will you hang out with me in those places to cheer me on? Let me know with comments!

Posted by Gamer Reverie at 6:35 PM No comments: