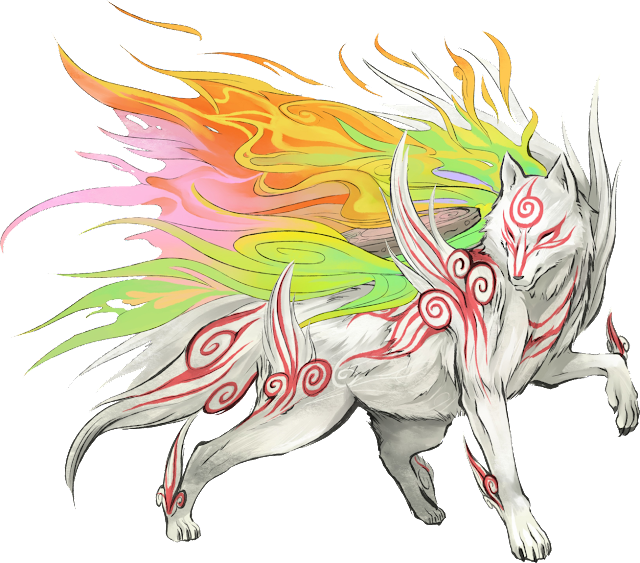 It was the summer of 2006 and I was fresh out of college. I was gifted my very own Playstation 2 as my first console, and one of the first games I bought was Okami.


There are many aspects of Okami that fans adore, and one of them is its massive soundtrack. The original soundtrack was released exclusively in Japan in 2005 on a set of 5 CDs and contained an exhaustive 218 tracks. Others have written about the soundtrack of Okami before, and I'll share links to those other articles at the end of this entry if you want to read more. 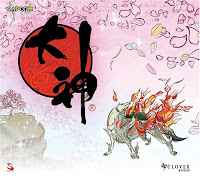 If you want to see which composer is responsible for your favorite tracks, you can see the breakdown here on this wiki page. This is also where I found most of the release information about the game's music. 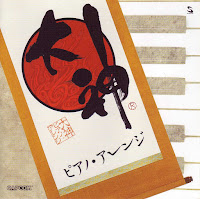 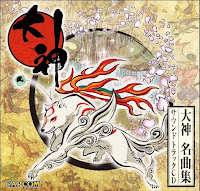 43 tracks (24 from Original; 1 from Piano)
Released with the Japanese Wii version of the game 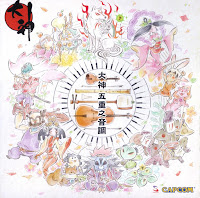 Okami: Tone of the Quintuple
2012
Sony

Masami Ueda was the lead composer for Okami. He was originally employed by Capcom from 1995 until 2004 when he joined Clover Studios, who produced Okami. In 2007 he moved on to PlatinumGames, and just last year in 2018 he left them to become a freelance composer. Aside from Okami, he has also composed music for Resident Evil games, Bayonetta games, and Super Smash Brothers Ultimate. In the Okami OST, Masami's contributions are present heavily in the prologue and starting areas, such as 'Kamiki Village' and 'Cursed Shinshu Fields.'

Hiroshi Yamaguchi started his video game composition work with Okami when he joined Clover Studios in 2004. He moved to Seeds in 2006. Like Masami, he joined PlatinumGames in 2007 and remains there. He was the lead composer for Bayonetta and The Wonderful 101. Star Fox and Super Smash Brothers Ultimate are also in his repertoire. Hiroshi's contributions to the Okami OST include some of the more whimsical pieces such as when you fill in a constellation, the theme for when you have to move on from a person or place called 'Time of Parting,' or the well-loved track 'Cherry Blossom Storm.'

Rei Kondoh is, according to the Nintendo fandom website, a prolific composer and sound designer. He is part of T's Music, which is a group of Japanese composers and sound designers who work on audio for electronic video games. He has also composed for TV and cinema, as well as produced his own CD albums. Rei's contributions to the Okami OST are significantly less than the previous two, but are notably some of the more mystical-sounding tracks, including 'Inside the Water Dragon' (which is my favorite track in the whole game), a very iconic 'The Sun Rises,' and 'Ezofuji Wawku Shrine.'

Akari Kaida Groves only had four track contributions to the Okami OST, but it would be a crime not to credit her. She began composing at Capcom in 1994 and has a lengthy list of track credits in various games such as Street Fighter Alpha, several Mega Man games, and Super Smash Brothers for Wii U. She became a freelance composer in 2005, but often still does work on Capcom projects. Of the tracks she contributed for Okami, the most impressionable one is 'A Great Spirit Lies In Wait' which plays before a huge boss fight and does a phenomenal job of building up the tension beforehand.

Ayaka Hirahara sings 'Reset' which was used as the ending song of Okami, and of which Hiroshi Yamaguchi made an orchestral version called 'Reset - Thank You Version.' She is a Japanese pop singer who comes from a family of musicians. She is currently studying in the Faculty of Jazz and majoring in saxophone at Senzoku Gakuen College of Music. You might also recognize her singing from the Spirited Away OST, as she sings Joe Hisaishi's 'The Name of Life.'

Mika Matsura is the musician who arranged and performed all of the tracks on the Piano album. Finding information about this individual seems to come up empty, but I did find a website with transcriptions of the piano pieces (and several other video game music pieces) if you are a musician who loves Okami.

Aside from the common instruments most of us Westerners are familiar with, the composers for Okami made use of some traditional Japanese instruments to give the game a more authentic feel as it takes place in Nippon (Japan).

The shamisen is a 3-stringed traditional Japanese instrument. It is played with a plectrum called a bachi. The shape variations of the shamisen depend on the genre in which it is used: a thin neck for kabuki, and a longer, thicker neck for accompanying puppet plays and folk songs. For some more basic knowledge, here's the Wikipedia link.

The shakuhachi is a Japanese bamboo flute resembling a recorder, but played much differently. Rather than being played like a recorder, the player blows across the top as if it was an empty bottle. This means there is a lot of variation in tonal quality and sound that the player can create using breath control, embouchure and the covering or partial covering of the five holes. Like the above instrument, you can find more information here on the Wikipedia page.


You can easily find the full OST on YouTube, and I hope if you decide to have a listen to it that you enjoy it as much as I have over the years!

Other Articles For Further Reading

Posted by Gamer Reverie at 9:15 PM No comments: 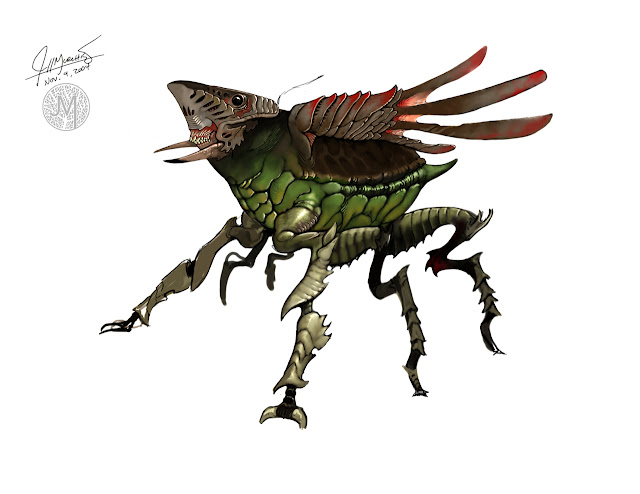 "They spent a miserable day in this lonely and unpleasant country. Their camping-place was damp, cold, and uncomfortable; and the biting insects would not let them sleep. There were also abominable creatures haunting the reeds and tussocks that from the sound of them were evil relatives of the cricket. There were thousands of them, and they squeaked all round, neek-breek, breek-neek, unceasingly all the night, until the hobbits were nearly frantic.

The next day, the fourth, was little better, and the night almost as comfortless. Though the Neekerbreekers (as Sam called them) had been left behind, the midges still pursued them."


Mentioned only briefly this way in the first book of the trilogy, it's easy for most Tolkien fans to forget the existence of these insects in Middle-earth -- particularly because they are never actually seen by the hobbits. But when you're a video game developer, and you need to fill in your mob list with lore-friendly enemies... neekers sure are handy to differentiate your MMORPG from the others who only have men who can't throw a punch, rabid wolves, skeletons/zombies, spiders, and swarms of rats.

Um... snark? Why are you writing a blog entry about... bugs?


Glad you asked, hypothetical-reader-who-probably-doesn't-exist! Last month, I told the webcomic artist, hoppystar, that if she finished an update of her webcomic before leaving on a several-weeks-long vacation across the ocean... then I would write a blog entry about her favorite creature from LOTRO. (No, I don't understand why she likes the things, either. Just roll with me here.) She got the webcomic updated in record time, so I am happily indulging her with this entry. It also gives me a fantastic springboard to make this into a series, and I have a few more creatures on my list. If you're reading this and have a LOTRO creature request, please let me know!

I had always sort of rolled my eyes when I found out I had to deal with these bugs. I mean... they're just overgrown bugs. But they're also annoying when they burrow into the ground mid-fight and you're stuck in combat waiting for them to resurface. Not having much else to go on for this blog entry, I turned my attention to the LOTRO wiki to dig up information about the roster of neekers in-game. I found a few interesting things!


Edit: Since publishing this, LOTRO has pushed out a game update that includes 3 neeker cosmetic pets! They are now available from lootboxes or for 2,500 Figments of Splendour each.

I took the time to hunt down the 3 signatures with names and used the skill Knowledge of the Lore-master in order to get a snapshot of their strengths and weaknesses. It took me about a week to find them (they don't spawn as consistently as I'd have liked), so I hope you appreciate the effort!

Allow me to present... 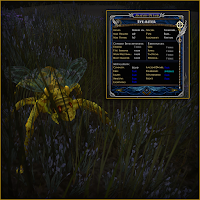 Eye-biter is the lowest-level neekerbreeker in LOTRO, at a whopping single-digit 9. Despite this, it is a rare signature and will drop the item Eye-biter's Carapace when squished. It can be found wandering in a northern area of the Midgewater Marshes (northwest of Marshwater Fort) in Bree-land, but its distinct gold color stands out against the purple of the Marsh Spiders, or the green and orange of the Green Neeker-breekers and Dun Neeker-breekers.

There is also a type of neeker called Eye-biter's Kin -- but they're found all the way over in Mirkwood! (Specifically in a quest instance in the Drownholt -- Midnight in the Drownholt.) When I discovered this, I thought it was a neat little Easter egg for those who might remember the little signature in Bree-land. 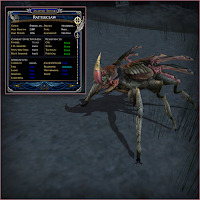 Rattleclaw is a signature nerbyg at level 33 and blends in supremely well with a host of other nerbyg in the Barandalf area of Evendim. The Sand-mounds are crawling with Sand-nerbyg, Huge Sand-nerbyg, Burrowing Sand-nerbyg, and summoned Broodlings. It took several passes of mowing down the regular mobs to get this one to spawn, but when it did it was to the northern side of the mounds. Being just a normal signature, the only item drop from this nerbyg is an Adamant Shard. 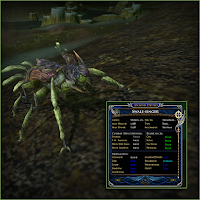 Swale-singer is a rare signature nerbyg at level 48 in Western Malenhad within Angmar (good news if you haven't finished the Epic far enough to get past the Watching-stones). The other good news is that there are no other nerbyg that spawn west of the Watching-stones, so it will be easy to spot. The catch? It has two general spots where it only sometimes spawns, and it isn't very often. Being a rare signature, it drops both a Beryl Shard and Swale-singer's Mandible.


The fourth signature neeker in LOTRO is a level 115 nerbyg simply named Frenzied Norbog. Killing this bug counts toward the deed Dangerous Foes of Agarnaith. It can be found in Mokál Rukh, which is an area on the Plateau of Gorgoroth in Mordor. Not being special enough to have a proper name, I didn't bother to hunt it down.


So now you know a little bit more about neekerbreekers in LOTRO!


I think it's great to see how resourceful the LOTRO developers were to take this one reference and utilize it throughout the game. Nicely peppered through appropriate habitats in a handful of regions, there are enough neekers to be aggravating when you encounter them, but not so often in the game that you become bored with them.

Posted by Gamer Reverie at 7:25 PM No comments: