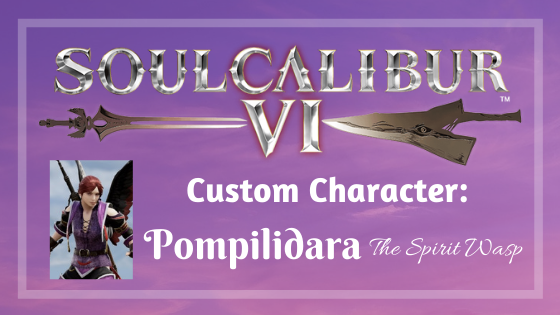 A blog entry about how much of a Soul Calibur fangirl I am. I'm willing to bet you didn't see this coming.


That's right, folks. I enjoy a fighting game. I'm not very good at fighting games, but since when has my lack of skill in a game kept me from playing? If you've been following me long enough, you'll remember I used to promote myself as a terrible gamer playing games to help sick kids. I upgraded to a casual gamer after a while because, well... at some point you're going to stop being terrible if you keep playing games!

My love of the series began with Soul Calibur III on the PS2. I played the campaign, and I practiced with all of the characters. I enjoyed one-shot games where I asked a friend to play me in a few matches. I also enjoyed struggling my way through all of the character stories. I'll be quite honest here: the story is never very deep, it's a fighting game. You either appreciate it for what it is or you move on to a Final Fantasy title or something with a bit more meat to it.

I never had a favorite character to play as, but spent a long time battling away in Tales of Souls to unlock Olcadan (the guy with the owl head). Naturally when they announced Soul Calibur VI and people began making custom characters... I wanted it badly. My husband is good to me and feeds my gaming habits, and the character creator mode was the first thing I dove into.

My first creation was... not very good. We won't discuss it. It never happened. There's no evidence to prove I did anything.

My more recent creation was a better version and I spent far more time on each element of the build. In addition to that, the game had gotten the Witcher update so that the Geralt build was available... and this was the ideal fighting style for my custom character.

To try and explain Pompilidara, aka The Spirit Wasp, to anyone who never knew her when I actively roleplayed... would be impossible. Some of the basic elements to her include having wings, having a mystical sort of power, wielding two swords, fire-red hair, purple eyes, tons of sass, and the obvious mettle to be both a pirate captain and a mercenary.

The wardrobe/cosmetic appearance of my custom character is based largely off of Talim's outfit, made a bit more modest. I only tweaked display appearances of Geralt's fighting style -- the colors of the magic effects, which two of his swords are used, etc. Overall, I was very pleased with the result. I've spent a lot of time playing this custom character in Arcade mode, but I will never claim to be anything but shoddy in a fighting game!

So, here's a clip I made earlier tonight in said Arcade mode, which pitted my build against Ivy. Please let me know what you think! If you enjoy it, consider making a donation on my Extra Life page -- the 24-hour marathon is less than 2 weeks away!

Posted by Gamer Reverie at 10:30 PM No comments: 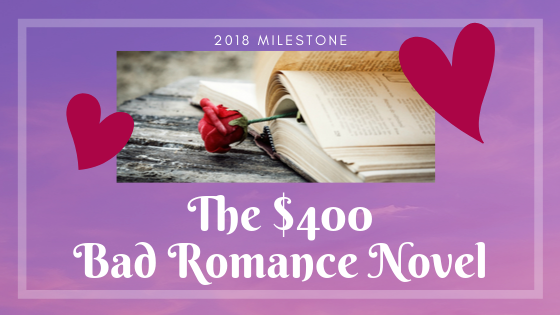 I knew this was going to be bad, I just didn't realize HOW bad.


In an effort to make sure I didn't read something overtly trashy (I'm raising funds for a children's charity, after all), I thought I could pick something normal-sounding from a selection of teen romance novels. This was a mistake. I'll preface the rest of this blog entry by saying that some people may actually enjoy the book. I was not one of those people.

The title of my ire in this entry is "That Boy" by Jillian Dodd. Out of respect for the effort it takes to write and publish a novel, I won't be putting any of that information in my blog tags lest this be taken for a smear of the work. It's not intended to be that at all -- I just don't like romance novels, hence why it was on the list of incentives for Extra Life last year!

The Plot (More or Less)

This book starts off in a small town outside of Omaha, Nebraska. A girl (who we don't even get the name of until a few chapters into her first-person narrative) named JJ grows up being an adorable little tomboy next door to a boy named Phillip who kisses her on the playground one day. Things are going swimmingly until another boy, named Danny, moves in and threatens to take Phillip away from her because he insists the usual stereotypes that girls are dumb and can't play boys' sports, like football. JJ promptly gets a pep talk from her dad, and she ends up decking Danny in the face. He lets her play with them after all and they become a trio of little friends.

The book follows JJ's life closely up through her senior year of high school for the first several chapters. She's vain, shallow, and can only think about boys and playing sports, but somehow maintains a strange friendship with both Danny and Phillip. The gist here is that we're supposed to be mentally keeping a tally sheet to figure out which of these boys she's going to end up with, because the very start of the book has a grown JJ fuming about the timing of their proposal. Starting in medias res? Check.

I was actually somewhat entertained by the first few chapters of the book because it very accurately describes what it's like to be a child in grade school and how interactions with classmates can make or break your school life from then on. The parent-child dynamic is painted very well also.

Dodd lost me when JJ got all worked up about a boy-girl party for her friend, and being anxious about spin the bottle and playing seven minutes in heaven. I was that book nerd who didn't get invited to parties like that, and I was happy with that arrangement. The few boys I had crushes on growing up never reciprocated, and I resigned myself to having to find a relationship outside of the small town I grew up in. So I did not understand why JJ was obsessed with "hunting" her local crop she'd known all her life. Not only did it paint her as hormonal and desperate, but I stopped caring about her as a character. I feel like a leading female character with more depth, and deeper interests beyond boys and football, would have made me want to see her happy with 'That Boy.'

Without giving away too much of the plot (no spoilers here, just in case someone's actually interested), there is tragedy that forces JJ to grow up a little faster than most. She ends up living in a house with both boys while attending college. One goes on to football stardom and a happy marriage. The other tries to hook up with JJ and there is a critical communication failure because (surprise, surprise) JJ's bad life decisions lead her to get drunk and flirt with someone else.

She has a pity party for a while, then moves on. They eventually reconnect thanks to the meddling of his mother, and then BAM... he proposes. Deus ex machina? Also check.

If you really want to find out which boy JJ ends up with, feel free to read it. There are even more books in this little series: "That Wedding," "That Baby," "That Divorce," and "That Ring." Not even joking. (If it makes you feel any better, I didn't spend any money on the first book.)

The Moral of the Story

I still don't like romance novels. It's fine if there is a romance as an underlying theme, or one that is a result of a larger genre/focus at work. It doesn't feel phony or shallow that way. Relationships that develop naturally through a variety of situations make it more meaningful to the characters and the readers. Otherwise it just feels contrived. But that may be my inner nerd talking. I relate more to Sophie from Howl's Moving Castle.

I was smart and did not include a romance novel in the 2019 milestone incentives. However, if you enjoyed knowing I had to suffer this way and want to see me suffer through more for the sake of raising money for Children's Miracle Network Hospitals, please click the image below to visit my donation page!

Posted by Gamer Reverie at 8:07 PM No comments:

A Very Special Message from a VIP 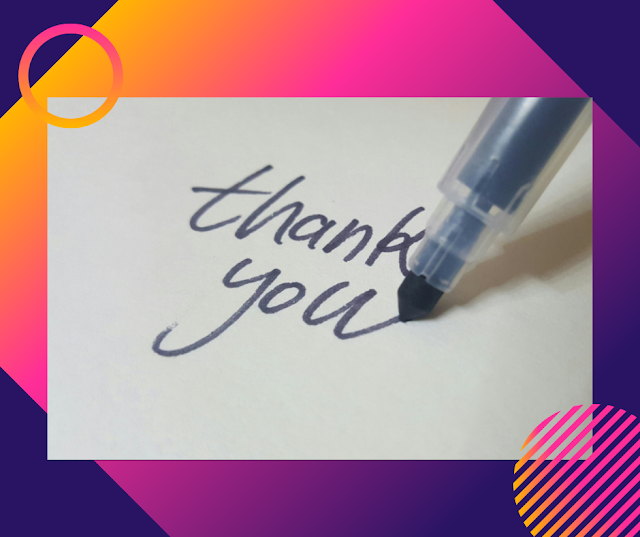 Did you think I was done being thankful for your support this year? Think again!


Back in August, the fine people at Children's National in D.C. issued a challenge to the Extra Lifers like myself who are playing games to raise money for the kids they treat. The challenge was to recruit 3 people or raise $100 by August 30th. I'm pleased to say that I was able to complete both challenges, and I couldn't have done it without you! You guys hit it so far out of the park that I ended up raising $286 in a span of 24 hours!

So here's a special thank you message from Brooke, a Miracle Kid at Children's National!

Posted by Gamer Reverie at 4:00 PM No comments: 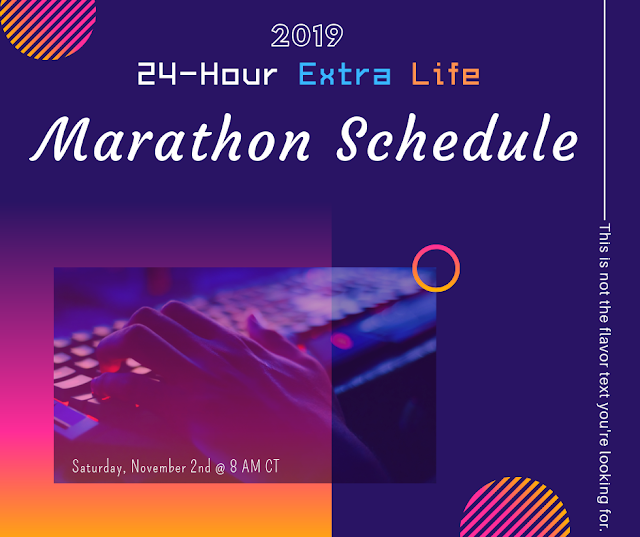 The final schedule is here for your perusal! I still won't be streaming this year, but I have a diverse selection of games I have not played... more or less.


You would think that making the marathon schedule would get easier each year, but since my game library grows each year it actually becomes harder. There are even more titles I've never played before, and still many that I want to keep "for myself" -- that is, I want to play them strictly for my own enjoyment and not with a blog entry in mind. That isn't to say I don't enjoy the games I play for the marathon or for blogging. A prime example is Town of Salem from last year's marathon -- I still play it on a regular basis and have even gotten my husband into playing it with me.

This year, I took my time and combed through my Steam and GOG libraries, writing down any titles I hadn't played which also hadn't come from $1.00 bundle deals until I had double the number I needed. I also asked my immediate family to help me select console games to throw into the mix this year from our PS4, Switch, and 3DS collections. There are six titles from those libraries, giving me a full third of my list's time away from the PC. I did this so I could get more movement during the marathon and help my eyes. I'm not as young and spry as I once was, and health issues mean I have to plan ahead and be smart to make sure I don't harm myself while trying to participate. I do this because it's fun and it's #ForTheKids -- doing irreparable harm to myself would be very counterproductive!

I set up an elimination chart for myself based on a combination of Metacritic scores and release dates: games with no score were arranged by release date on the opposite end of the spectrum. I then went through the list of 1vs1 and chose one title over the other based on what I felt would give me enjoyment as well as be a title worth writing about after the marathon. Sometimes it came down to simply liking a release trailer better, and I'm not ashamed to admit that.

Games That Didn't Make the Cut

The Marathon Games by Platform

But I know what you really want. You want to see the schedule in its final layout.
So here it is! Click the image to view it in all its glory. 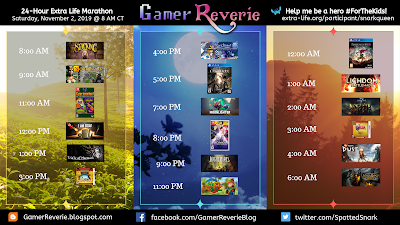 Think something from the reject list should have made the cut?

Let me know in the comments!

Posted by Gamer Reverie at 7:54 PM No comments: