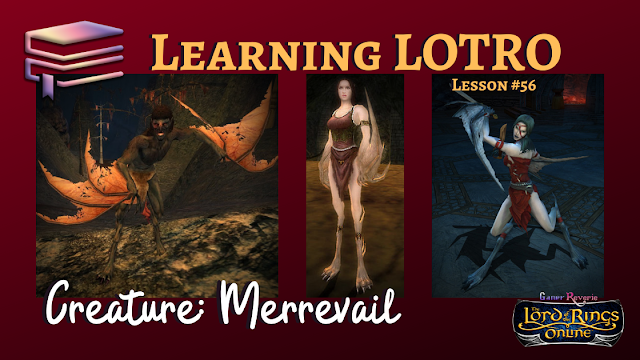 Welcome to a new sub-series of Learning LOTRO: Creatures! I have wanted to write this entry for a VERY long time because it's about one of my favorite creatures that can ONLY be found in The Lord of the Rings Online... merrevail! If you aren't familiar with that word, it's possible your characters aren't yet level 40, you haven't survived The Delving of Frór, or you haven't visited Angmar. If so, let's explore the species together!

You are most likely going to see what many players call "bat babes" -- bat-like women found in some of the vilest parts of Middle-earth. Where there's one, there's often many more. A female is called a morroval (Sindarin for "black-wing"), and a male is called a morvul ("black-slave"). The males are more monstrous in appearance, and are hunched over, and not as prevalent as the females.

The term "vampire" was used to loosely describe bat-like creatures which served Morgoth, and specifically a bat-like woman named Thuringwethil who served Sauron as a herald during the time of the Quest for the Silmaril. Her name means "Woman of the Secret Shadow," and her origins are unknown -- though because of her ability to change form she may have originally been a Maia.
In LOTRO, there are in-game snippets of story and lore which lead players to believe that merrevail are not fallen Maiar, but creatures which come into being the way other mortal races do and may have some long past kinship with Men which they resemble. They have a strong bond with bats and use them as spies and protectors. 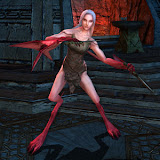 Merrevail are matriarchal, with groups being led by queens or matrons of varying power. The morvul are able to attain high ranks as warriors and leaders through combat, but they are rare. As seen in some locations they will make use of trees but more often than not simply occupy a space that was previously inhabited by other races, or lay claim to caves which they often cohabitate with bats.

The merrevail can be found in Angmar, Mirkwood, Moria, Mordor, and the Ettenmoors. If you aren't jumping into PvMP at a low level, your first encounter with merrevail is most likely going to be in Angmar. From that point on, you'll find them in every area with a large and powerful presence of the Enemy. 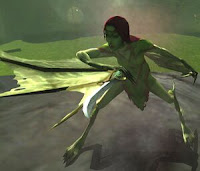 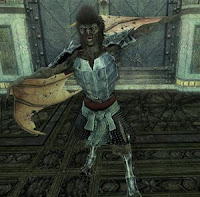 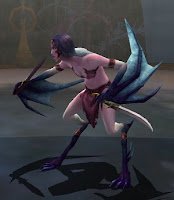 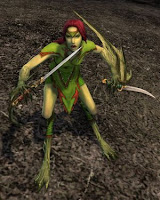 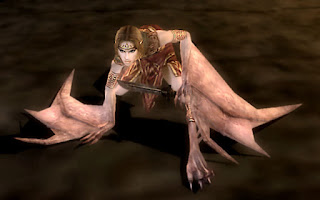 I have for many years wondered why merrevail aren't a playable Monster Race in PvMP. There are many more types of Freep classes, so adding another Creep class would actually lend itself towards the interest of balance (though I doubt that PvMP will ever truly be balanced -- sorry). But can you imagine how much fun it would be to have merrevail in PvMP? They could summon a small swarm of bats the way the weaver can summon a baby spider. They could be an amazing counter to the Warden class, having a variety of attacks that could stack and either do damage or debuff as necessary. We know that they have natural claws as weapons, and some have additional types of attacks such as bat-like sonar, and still others are skilled with blades. At the end of the day, is it too much to want a sultry walk to distract or debuff an unwary Freep? I'm sure there's probably a thread or few on the forums championing this idea, I just haven't gone looking. Who's with me?!

How do you feel about the bat babes? Let me know in the comments or tag me @spottedsnark on Twitter! 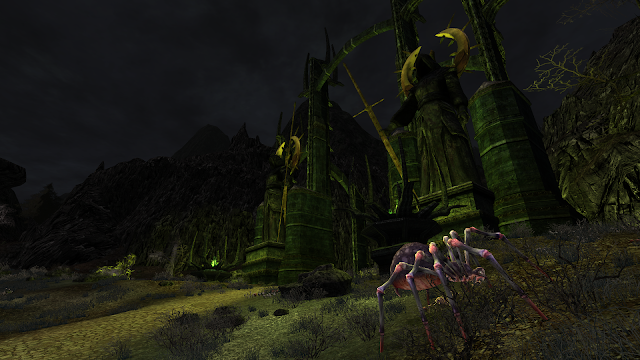 Now through April 15th, pledging at any tier earns you a sticker in the mail!
🠟 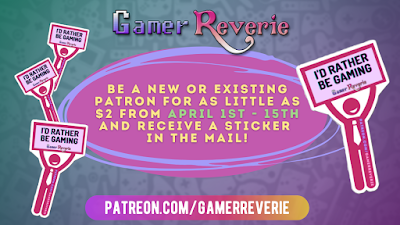