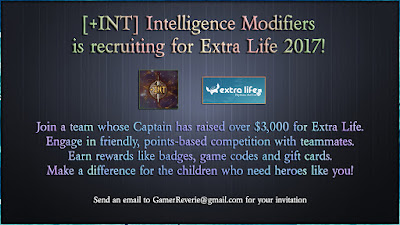 I'll just leave this here for anyone who might be interested. I'm happy to answer any questions you may have!

Posted by Gamer Reverie at 2:13 PM No comments: 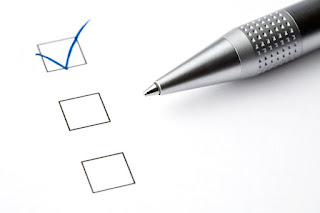 I'm looking for some feedback so I can make some strong, worthwhile incentives for donors and fellow teammates this year. If you've enjoyed following my Extra Life endeavors over the last 4 years and would like to help make the 5th even better, please take a moment to answer the following survey. Thank you!


Posted by Gamer Reverie at 5:06 PM No comments:

Like the title says, I came up with a handful of incentives that I felt were reasonable and feasible to offer. If anyone has better suggestions, by all means share them with me! I welcome feedback on things that are more relevant to my audience (that's you). 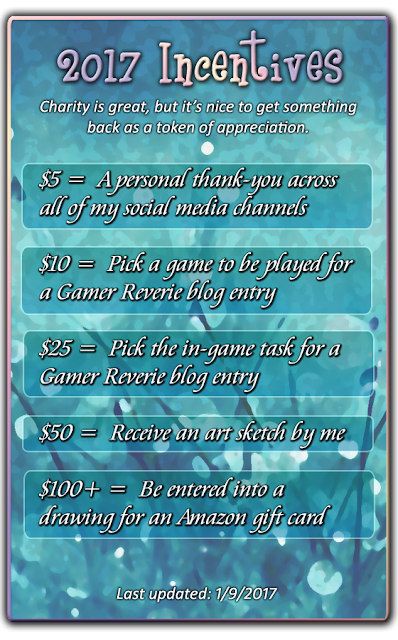 I plan to start regular blog entries for Extra Life in February, but will probably do some "practice" entries in the coming weeks. Let me know what you'd like to see, especially those of you who are familiar with my games and gaming style!

Posted by Gamer Reverie at 12:08 AM No comments:

The Reason to Write: Extra Life 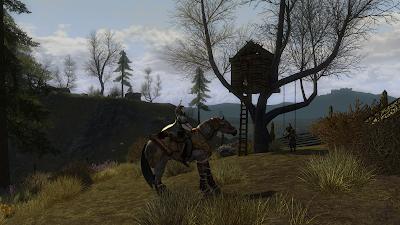 Extra Life is a non-profit charity where gamers play games to raise money for Children's Miracle Network Hospitals. Each participant chooses a hospital to raise funds for, and they ask for people to make donations on their very own donation pages in order to sponsor their game time. Some people game all year long, with many of them streaming their video games via Twitch or YouTube. Others do it all in one exhausting Marathon day designated by the charity -- typically in October or November.

I have done both over the years of my participation, but in this past year I hit a gigantic bump in the road that challenged me to find an alternative to my previous habits. I had lived in an apartment and was free to hog all of the bandwidth my high-speed internet offered, until I moved several states away onto a winding road outside of town where the available internet options were few and very slow. I now have to make the best of a prepaid hotspot which affords a meager 5 GB per month. That clearly prevents me from doing any kind of streaming on Twitch or even uploading videos afterwards. So what was I to do?

I had toyed with using Twitter and a Steam group this past year, doing regular tweets as I played games on the Marathon day, and keeping people aware of when I was playing games through the Steam group announcements. Neither of these were terribly effective at reaching out to people, so I'm trying a different tactic: a gamer blog.

If you're thoroughly bored by this prospect, I thank you for reading this far. If you'd like to follow my gaming throughout this year, I encourage you to bookmark this blog. You can, of course, follow via Twitter and the public Steam group.

Help me be a hero for the kids this year!
Posted by Gamer Reverie at 11:06 PM No comments: