The Lord of the Rings Online: A Game With a View 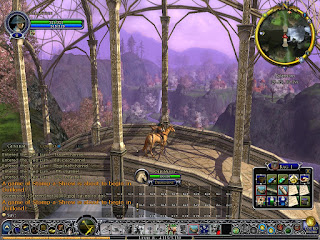 Once upon a time, I was in a long-distance relationship with a young man I had met through space pirate roleplay in Second Life. (Yeah, let that craziness sink in for a moment.)

He was a well-established gamer, having not only his PC but also an Xbox and a PS3. Okay, so I had my old PS2 as well, but those games were hardly new by any stretch of the imagination. And at this point, he had fallen victim to one of the great plagues of our generation: Skyrim. Not sure what to do to try and make our long-distance 'thing' work when he was always playing Skyrim, I took the plunge and installed Steam. "This way," I thought, "I can still talk to him while he plays." You can't blame a girl for being optimistic.

I had previously loved to play games on my PC -- though they were pretty much just adventure games or turn-based strategy. My previous relationship had squashed all of my hobbies out of me and wiped my creative slate clean. My only bastion was the roleplay where I was a snarky pirate captain with technomancy powers and a ragtag crew of crazies. (When you need to escape, that's a great way to do it.) So when my friends discovered I had ventured into the realm of Steam and all of its glorious sale opportunities, they wasted no time in dumping a variety of games on me -- many of which I had never expressed an interest in.

I went through several months of sampling the games I was gifted: some were fun and I still return to (Faerie Solitaire, for example); and some were so terrible I hate to even mention their names here (most notably TRAUMA and Dead Mountaineer's Hotel). I found myself yearning for something more engaging and more in-tune with the gaming community. I felt detached as I tried to play these solo games, and so I went looking for anything that was both free to play but would also let me mingle with other gamers.

As luck would have it, there was an MMORPG that had just gone free-to-play. That game was The Lord of the Rings Online. Now, at that point in time I was very much NOT a fan of Tolkien's writing. It was far too dry for my tastes and I hadn't enjoyed The Hobbit or the related trilogy, much less The Silmarillion that I'd had to read for a college course about Tolkien some years previously. I had enjoyed the recent Lord of the Rings movies, however, so I figured it couldn't hurt to give the game a try since it was free.

The first hurdle, for me, was character creation. I knew that in a lot of MMOs people also roleplayed, and I didn't know if I would ever care to give that a try. Still, I wanted to make sure that I created a character that had the potential to drop into roleplay if I ever wanted to do so -- and that's how I came to imagine the elven hunter, Aarawynn.

Aarawynn's name was never my own creation. She had, in fact, been a child character some friends of mine had asked me to play many years ago (16 years ago, back in the golden days of AOL chat room RP). The last name I later learned was taken from a popular book series and I refused to use it after that point, but the character that Aarawynn grew to be was all my own creation. She learned to use a bow (because I have always had a fascination with archery) and enjoyed time in the woods. That led me to choose the hunter class in LOTRO.

The introduction area was well-done and helped me feel like my character was definitely part of something much larger happening in Middle-earth. I wasn't entirely sold, though, and told myself I should see more of the game before deciding if it was worth investing some money in. I had used a crumbling whistle and was riding my temporary mount from Celondim to Duillond when I first saw it -- that gorgeous view of the Falathlorn Homesteads from the bridge. It was striking enough to me that it became my first, badly-taken, screenshot in the game (pictured at the top). I didn't even care that my UI was visible and you could see my garish equipment and lack of cosmetics. The view captivated me.

Next thing you know, I'm recruiting my then-boyfriend to play the game with me. He was never as into the game as I was, but he was a good sport and did enjoy being able to play something with me. Over the last five years, I have done nothing but fall further in love with this game -- every new breathtaking landscape or creative quest or engaging NPC pulls me back in with new fervor. And while I have many more things to discuss about the game, I end this entry with a small sampling of my favorite screenshots. 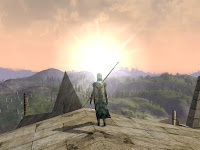 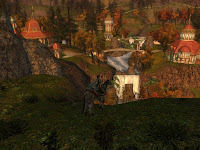 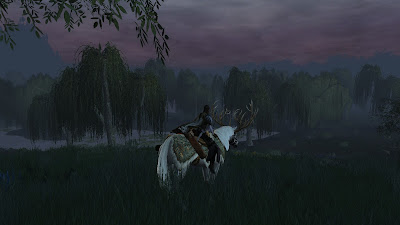 For more screenshots, you can check out my Steam profile.
Posted by Gamer Reverie at 5:14 PM No comments: