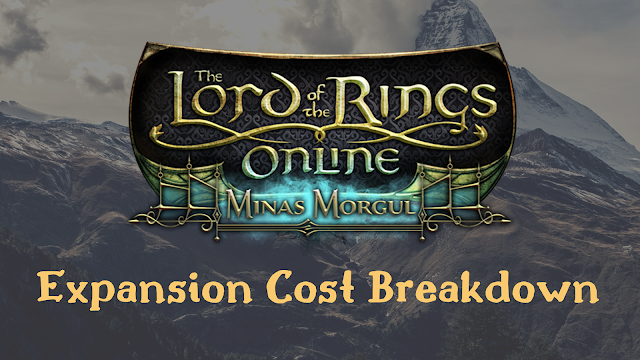 I broke down the cost and value of the Mordor expansion when it became available to pre-purchase, so I am following suit with the upcoming Minas Morgul expansion.

I'll have to open with this caveat: I'm not a math whiz. It's entirely possible I messed up in my calculations somewhere. If you think I have, PLEASE don't hesitate to comment and call me on it! I want this breakdown to help people make sound spending decisions so they can enjoy playing LOTRO without stressing about overspending or feeling regret later by not getting it if they really can.

With that out of the way, I'll satisfy those who are impatient first:

I made the full list of items and then either wrote down their current point value from the LOTRO Store, or used the point value of the closest equivalent that is currently available. If there was nothing like it available, I'll explain the logic behind my price estimate below.

The first value listed (above) is arrived at by tallying the individual costs in USD -- what you would arrive at if you tried to buy everything in the pack separately (using best exchange rate of points to dollars). The second value is the estimated points needed to purchase the items.

One big difference this time was that they didn't include any VIP time in the deal. Despite that, they seem to have learned from a complaint about last time: they offered a lot of items you could already purchase in the store and people fussed as a result. This time, the majority of the items are unique to the bundles, with a few exceptions.

And there you have it. I hope this helps you decide which pack to purchase if you really gotta have the stuff and the shinies right away. If you aren't that sort of player, I hope this helps you feel better about waiting until March to spend points on the expansion and/or new race. Either way, this took me a couple days to sit down and figure out -- if you appreciate it, leave me a comment and consider making a donation on my Extra Life page linked below! 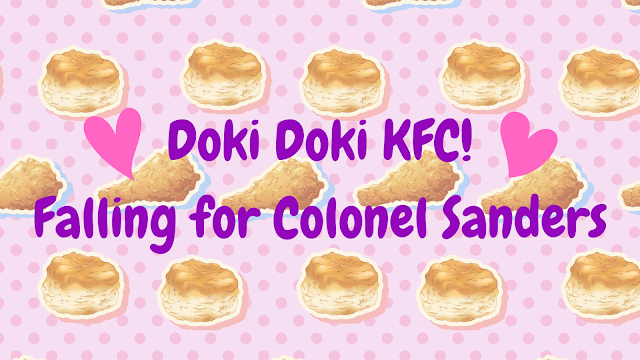 KFC made a dating sim game in which you attend culinary school with Colonel Sanders. You're curious about his 11 herbs and spices, but you find yourself wanting so much more...

Yeah, that's the premise of this game. It sounds ridiculous, doesn't it? But it's that wonderful sort of ridiculous that prompts you to give it a try -- because, hey, the game is FREE. You know going into it that there is going to be plenty of product placement, but is that really a bad thing if it's KFC food? (Have you tried their mac and cheese lately? It is NOT what I remember eating years ago, and that isn't a bad thing!) 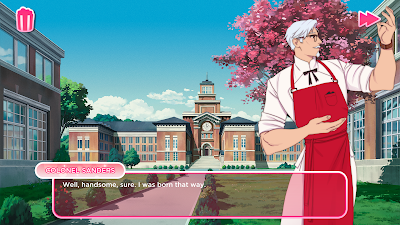 This game doesn't pretend to be an amazing visual novel, dating sim, or anything else. We all know that Harland Sanders (The Colonel) was never an actual colonel of military rank. He was a businessman who was given the Kentucky Colonel honorary title (which can be given by the Kentucky governor in recognition of noteworthy accomplishments and outstanding service to a community, state, or the nation). The hunky, near-magical culinary expert presented to us in this game is not even the slightest bit factual with one exception: he, at one point, talks about having failed a lot in his lifetime in trying different career choices. Despite this, the game somehow makes Harland amazingly attractive. As one Steam review comments, "Colonel Sanders is the best waifu of the year." I have to agree.

Standard elements of a dating sim/visual novel apply here. There are ridiculously embellished rumors and descriptions -- highly romanticized notions that are designed to make you (or at least the character you're playing) swoon. There are also dream sequences, fight scenes, critical choices where you choose your friend or your love interest, exaggerated physical features, dramatic personalities and emotional upheavals -- I could go on for a while. If you play these kinds of games regularly, this one fits right in (if being a bit tongue-in-cheek while doing so).

There is a wild cast of characters here to entertain any anime fan. The stereotypes are strong with this one. The loyal but ditzy/quirky best friend. The petty and shallow mean girl. Her buff but dumb guy sidekick. An innocent young victim of bullying. A token nobody to be a butt of jokes. A talking animal. A random, way-out-there character that probably isn't human. Something supernatural. And of course, your hunky heartthrob you desperately want to notice you.

But the real reason we're here and this game exists is, of course, to make us fall in love with The Colonel. There's no shortage of romanticizing of Harland Sanders throughout the course of the game, and the game goes beyond the call of duty to make it absolutely magical. It's so absurdly amazing that you don't even care if it's illogical -- you want to be there, salivating over his crispy chicken and pecs. (It's okay, I'm allowed to say that. My husband has played the game also and said he wants to caress his greasy muscles.) 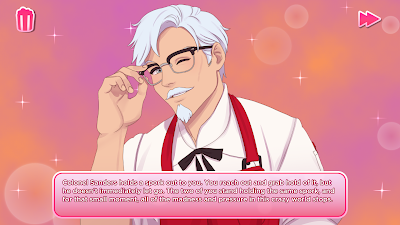 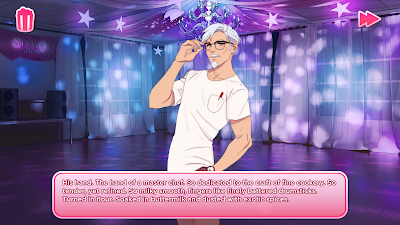 Look. Playing this game meets the main objective of KFC in that it promotes their food and makes you want it, provided you enjoy eating it in the first place. It's okay if you don't enjoy it, you freak of nature. That just means there's more crispy, creamy, savory goodness for the rest of us. In any case, you'll probably want to go get you some KFC after playing this game. I know I've been craving some popcorn chicken, mashed potatoes and mac and cheese since I played the game last night.

The magic is in the mayhem. I'm only sharing a few screenshots and details because I honestly don't want to spoil the experience for anyone who wants to go play this game -- which I think you should! Just know that there's a lot more to this game and I'm doing my best not to include any spoilers. (Feel free to chastise me in the comments if I do!) 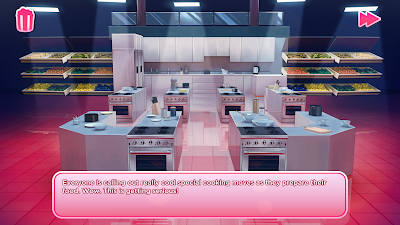 Despite the wild ride, don't forget that KFC made this. They really just want you to buy their food. Even if Harland might be spinning in his grave. 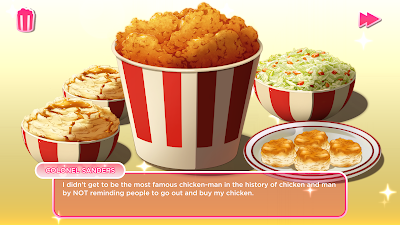 As I mentioned, my husband has played the game also. That is, he's started to play it. At the time of this blog entry's posting, he has played 20 minutes of the game and posted his video on YouTube with plans to most 2 or 3 more until he finishes his play through. If you want to experience the game with his silly commentary, just click the image below! He will be delivering more videos in the future, with a focus on indie games and a few bigger titles like the upcoming Code Vein. 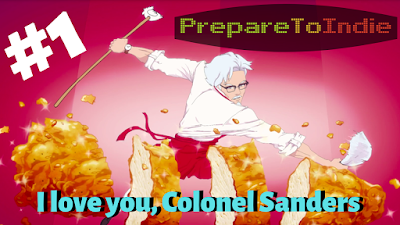 Posted by Gamer Reverie at 1:22 PM No comments: 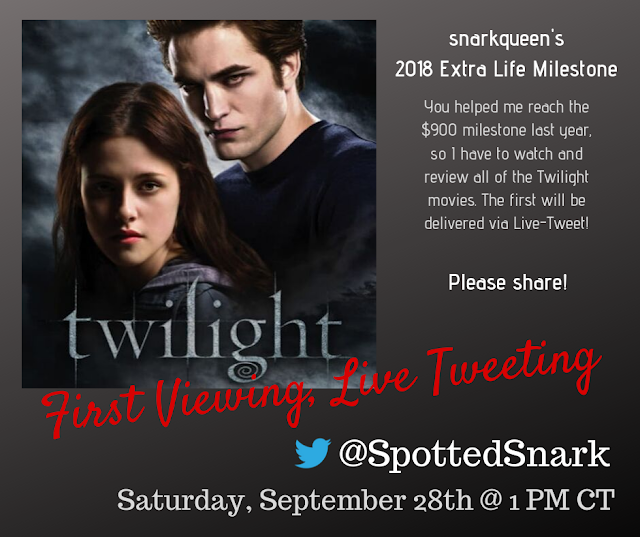 Posted by Gamer Reverie at 12:43 PM No comments:

2018 Milestone: How to Eat the World's Hottest Chocolate Bar 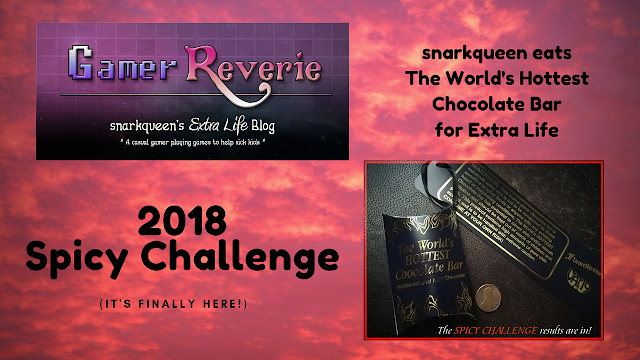 It's finally here in all its glory!

Click the picture to go see my Spicy Challenge video!

Posted by Gamer Reverie at 8:18 AM No comments: