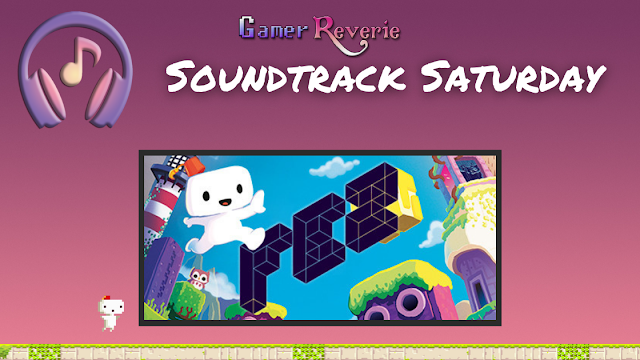 In this weekly feature, I recommend game soundtracks. I share a few of my favorite tracks, talk about why everyone should listen to the soundtrack, and a little bit about the composer. This week's choice is Fez by Polytron Corporation.

(The full list of tracks are linked below... and I highly recommend some good headphones to best enjoy all of the subtle elements of the music!)

Puzzle
(Length: 2:14) At first sounding like a distorted variant of the first track, pretty soon you start to wonder if you're listening to some kind of strange filler in a Pink Floyd song... but I like it. It's mysterious and interesting!
Flow
(Length: 3:47) The beginning makes me think of drops of water beginning to increase in flow, and it builds into a proper melody with light percussion. It's aptly named, and this is my clear favorite!
Compass
(Length: 2:44) I swear I heard something by Honeyroot that was almost identical to the beginning of this track. It's a nice opening -- very space-y.
Majesty
(Length: 3:22) This sounds like such an 80's boy band song or love song. And for some reason, I like it.
Continuum
(Length: 2:35) Despite the distortions, this sounds like a modified classical piece -- dramatic, sad, emotional. If Beethoven wrote chip tunes...

You can listen to the entire soundtrack here, courtesy of a bandcamp widget, or you can click this link to go visit the bandcamp page directly, or if you prefer you can acquire it over here on Steam.

WHY DO I RECOMMEND IT?

This is not just your average chiptune game soundtrack. There's depth and layers, distortions and an 80's vibe -- it's not just a soundtrack, it's an experience. And while (full disclosure) I did not enjoy the game, I can deeply appreciate the time and craft that went into composing the soundtrack. If you have enjoyed other chiptune soundtracks I've shared, add this one to your list!

I had no idea until I was researching for this entry (again -- I do this a lot, apparently) that Richard here has composed for some other titles I enjoy. Most notably, he composed for Monsters Ate My Birthday Cake. I know that probably isn't a familiar title for you, but it's an indie game I enjoyed playing a lot. I will now have to go back and re-listen to the soundtrack for fuller appreciation! Also among his soundtracks are titles like Puzzle Agent, Shoot Many Robots, Runner 2, Mini Metro, Hyper Light Drifter, and Reigns. You should at least recognize Hyper Light Drifter. If you don't, you need to get explore more games!
Posted by Gamer Reverie at 8:00 AM