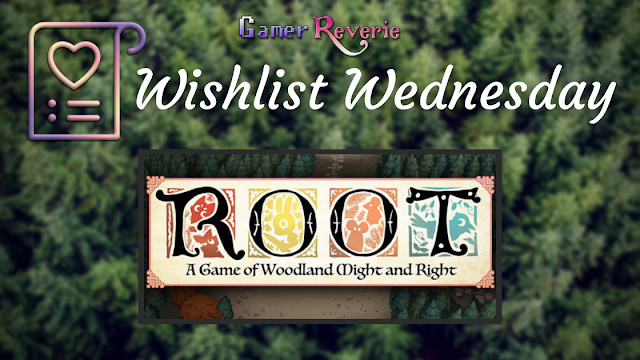 In this weekly feature, I share game titles from my various gaming wishlists. I share screenshots and video from the developer, talk about my expectations, and generally just ramble about why the title made it onto my list in the first place. This week's choice is Root by Dire Wolf.


WHY I WANT IT

Fans of Armello probably already know this title. If not, you should check it out!
Originally a physical tabletop game, this is of the strategy variety in which you pick an animal faction and then pick how you want to take over everything on the board: cooperation, conquest, or revolution. It's really that simple. You can even play shared/split screen, online PvP, and cross-platform. The graphics style reminds me strongly of the Costume Quest games, and there are other titles by this developer in my queue to be written about! The game also has a DLC that introduces new factions to fight, as well as letting you play co-op against the enemy. I am also a fan of the January patch that introduced a Winter map with challenges, and I look forward to seeing what else they add to the game! The reviews indicate that the game was translated to online from tabletop in a great way -- a shortcoming of a lot of tabletop games expanded for digital playability. Its Very Positive rating on Steam is also a good sign that I'll probably enjoy this game.
If you agree, you can snag it on Steam here or use this handy widget:

If that isn't enough to pique your interest, then this probably isn't your genre -- and that's okay! Check back next week for another title and let me know what you think of my selection!