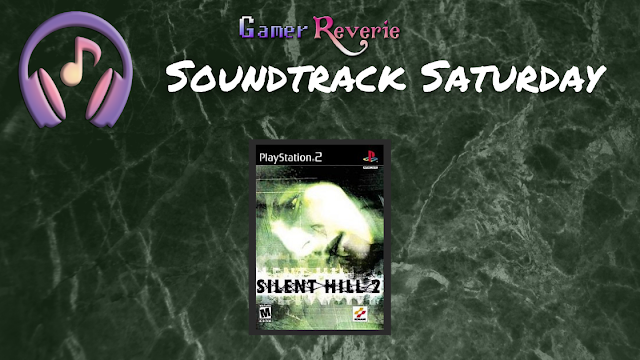 In this weekly feature, I recommend game soundtracks. I share a few of my favorite tracks, talk about why everyone should listen to the soundtrack, and a little bit about the composer. This week's choice is Silent Hill 2 by Konami.

(The titles link to YouTube videos... and I highly recommend some good headphones to best enjoy all of the subtle elements of the music!)
Promise (Reprise)
(Length: 1:44) Haunting but innocent tones! While the original Promise has all the 90's rock vibes I grew up on and miss, the Reprise adds that something creepy that makes it extra nice.
Null Moon
(Length: 2:50) Very chill, and I hear elements similar to a favorite band of mine from the same time, Primitive Radio Gods.
Angel's Thanatos
(Length: 3:17) They had me with the gritty 90's rock guitar.

Love Psalm
(Length: 4:26) The guitar work in this one is incredible! It sounds like the perfect intro or outro to an anime.
True
(Length: 3:06) Everything about this track is balanced and beautiful -- between the piano, the light percussion, and the singing cello. It reminds me of the first track I heard by Akira Yamaoka, which is from Silent Hill 3... and this has the same flow and haunting element to it.
You can listen to the entire soundtrack on YouTube:
Silent Hill 2 OST

WHY DO I RECOMMEND IT?

I was so unexpectedly charmed by the composition work in the first soundtrack that I decided to give the next game's OST a listen as well. Lo and behold, it was even better. There's more of a distinct flavor and theme to this soundtrack than the first, and I think if you liked what I shared last time you'll like this one even more!

I covered Akira pretty well when I wrote about the first game in this series back in December, Silent Hill. I couldn't possibly add anything cooler than what I already said there. You can probably expect to see more of the series' soundtracks featured here in Gamer Reverie!
Posted by Gamer Reverie at 8:00 AM